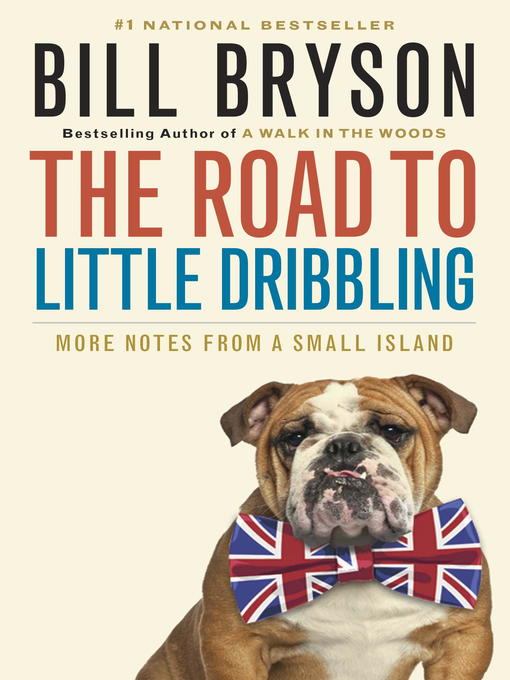 The Road to Little Dribbling

More Notes From A Small Island

Bill Bryson returns to his internationally beloved topic, Britain, with his first travel book in fifteen years.In 1995, Bill Bryson went on a trip around Britain to celebrate the green and kindly island that had become his home. The hilarious book he wrote about that journey, Notes from a Small Island, became one of the most loved books of recent decades. Now, in this hotly anticipated new travel book, his first in fifteen years and sure to be greeted as the funniest book of the decade, Bryson sets out on a brand-new journey, on a route he dubs the Bryson Line, from Bognor Regis on the south coast to Cape Wrath on the northernmost tip of Scotland. Once again, he will guide us through all that's best and worst about Britain today—while doing that incredibly rare thing of making us laugh out loud in public.
Publisher: 2015
ISBN: 9780385685726
Branch Call Number: DOWNLOADABLE eBOOK
Characteristics: 1 online resource data file,rda

Classic Bill Bryson travelogue - hilarious romp around a Britain that Bryson is still trying to figure out.

I remember reading the first book and laughing a lot, having been born in England and having experienced much of what he did. However this sequel was crotchety and depressing, all the more because it’s true. Even when we last went back many years ago, it was sadly much changed.

Great book on England in recent times - Bill Bryson loves England and it shows in his descriptions of the wonderful countryside, laugh out loud comments and tongue in cheek observations.

Where is the Bill Bryson of yore? In this book he's a grumpy old man (though only 65), sarcastic and mostly dull. Very disappointing.

If you happen to love the UK like I do, Bryson's book is for you. Honest, charming and cheeky, he writes about the things that endear us most to England. I was especially struck by the chain of events that took him there in the early 70's and kept him there until now (pg. 75-77). I put the book down for a minute and thought about how the smallest decisions somehow completely change the course of our lives. I had a similar experience to some of Bryson's not too long ago.

Last year, I stopped into a sweet shop in the UK and realized it was the same shop I had gone to on my fist trip abroad at 21. At the till, I asked the man if by chance he had been there 20+ years. He said, "Why, yes. I took early retirement from the military and bought this shop 20 years ago." I told him he had sold me the same toffee then. He came out from behind the counter, kissed me cheek and said, "welcome back, love."

Kind people, beautiful country. No wonder Bryson loves it so much.

This is a sequel to Bryson’s book “Notes From a Small Island” published 20 years earlier. In the first book, he travelled from Calais to John O’Groats and back to his home in the Yorkshire Dales. This second book starts in Bognor Regis on the south coast of England and finishes at Cape Wrath on the northwestern tip of Scotland and visits a completely different selection of villages, towns, cities and rural countryside.

This is a travel book and much more. The descriptions include commentary on the state of things in Britain today and comparisons to the way things were in the past – highlighting both the improvements and the losses. He deplores the deterioration in the standard of spoken and written English grammar and punctuation. He mourns the loss of the traditional High Streets with their local family-run butchers, fishmongers, grocers and clothing shops – all of which are replaced by large chain stores and malls. He is especially critical of what he perceives as stupidity at both the individual and institutional levels and of the poor service he often received from businesses. There are lots of obscure and interesting historical anecdotes and he has high praise for most of the museums he visited.

In spite of all the things he finds wrong, Bryson, an American who has lived there for 40 years, clearly loves Britain and ends the book with a list of many reasons why, most importantly the beauty of the countryside: “There isn’t a landscape in the world that is more artfully worked, more lovely to behold, more comfortable to be in, than the countryside of Great Britain.”

The book is well written and very funny – although there are not as many laugh-out-loud belly laughs as in the previous book. The previous book had rather too liberal and unnecessary use of the F-word for my taste. The word still appears in this book but, thankfully, not as frequently.

The book is informative and entertaining and well worth reading.

Bill Bryson makes me laugh out loud. This follow-up book on travelling the UK is right on form and highly recommended.

Great news, Bill Bryson fans: his first travelogue in many years is finally here! In this delightful sequel to Notes From a Small Island, Bryson once again travels across Great Britain. But both Britain and Bryson have changed in the 20 years between books; he's older and more well-traveled, but feels like he understands his adopted country about as much as he did when he first arrived, and Britain...well, you'll need to read the book and see! With wry musings and observations, Bryson once again proves to be a persnickety but charming guide. For a similar U.K. tour but by a native Englishman who's lived in New Zealand for years, try Joe Bennett's Mustn't Grumble.

Great news, Bill Bryson fans: his first travelogue in many years is finally here! In this delightful sequel to Notes From a Small Island, Bryson once again travels across Great Britain. But both Britain and Bryson have changed in the 20 years between books; he's older and more well-traveled, but feels like he understands his adopted country about as much as he did when he first arrived, and Britain...well, you'll need to read the book and see! With wry musings and observations, Bryson once again proves to be a persnickety but charming guide. For a similar U.K. tour but by a native Englishman who's lived in New Zealand for years, try Joe Bennett's Mustn't Grumble.

i find this book hilarious. i've been to alot of these places and would like to visit more. well written and enjoyable.

.....this was one of the things that I really like about Britain: it is unknowable. There is so much to it.......If you decided to visit one standing stone a week, it would take you twenty years to see them all.

The British, you see, are always happy when they ought to be - when the sun is shining and thy have a drink in their hands and that sort of thing - but they are also very good at remaining happy when others would falter. If, for instance, they are walking in the countryside and it start to rain, they pull on their waterproofs and accept that that's just the way it sometimes is. Living in a British climate teaches patience and stoicism. I admire that.

But what really sets the British apart is that when things go very wrong and they have a legitimate reason to bitch deeply, bitterly and at length, that is when they are the happiest of all. A Briton standing in a minefield with a leg blown off who can say, "I told you this would happen," is actually a happy man. I quite like that in a people. p. 380

I went to Inverness and visited the battlefield at Culloden, where two thousand men lost their lives fighting the English, and then to Glencoe, where still more died when Campbells notoriously massacred Macdonalds, and I sombrely reflected that the history of the Highlands is five hundred years of cruelty and bloodshed followed by two hundred years of way too much bagpipe music. p 374

At the village of Scourie, I passed a sign that said 'Scourie Beach and Burial Ground', which seemed an enchanting combination. ('We're burying Grannie tomorrow. Don't forget to bring your swimming costumes.') p. 371

Our steward passed and told me that a freight train had broken down further up the line and that our engine had gone to save it. I was, it seemed, now living in a Thomas the Tank Engine story. p 369

Everything on offer was robustly Scottish and not the least bit appealing to someone from Iowa. (I believe I can speak for my entire state on this.) The dinner options featured haggis, neeps and tatties, and the snacks included Tunnocks teacake, haggis-flavoured crisps and Mrs Tilly's Scottish Tablet, which sounded to me not at all like a food but more like something you would put in a tub of warm water and immerse sore feet in. I would imagine it makes a fizzing sound and produces streams of ticklish bubbles........It is perhaps dangerous to conclude too much about the character and intentions of a nation based on a snacks menu in a railway carriage, but I couldn't hep wonder if Scottish nationalism hasn't gone a little too far now. I mean, those poor people are denying themselves simple comforts like Kit-Kats and Cornish pasties and instead are eating neeps and foot medications on grounds of patriotism. Seems a bit unnecessary to me. p 368

The news pages of the paper were liberally sprinkled with articles about pub beatings - five on one page, just from this area - but everything else was about flower shows and fun runs and people shaving their heads for charity. I had never seen such a range of kindliness and violence coexisting in one locality. When I went for a second pint, I turned round and a guy was standing behind me waiting to take my place at the bar. We went through that little side-to-side dance where you keep inadvertently blocking the other person's way. I smiled helplessly, as you do, and he looked at me as if he was thinking about shoving my head through the wall. That is the problem with Scotland, I find. You never know whether the next person you meet is going to offer you his bone marrow or nut you with his forehead. (p. 365)

There are no age suitabilities for this title yet.

There are no summaries for this title yet.