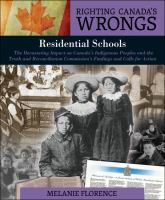 Canada's residential school system for aboriginal young people is now recognized as a grievous historic wrong committed against First Nations, Metis, and Inuit peoples. This book documents this subject in a format that will give all young people access to this painful part of Canadian history.

In 1857, the Gradual Civilization Act was passed by the Legislature of the Province of Canada with the aim of assimilating First Nations people. In 1879, Prime Minister Sir John A. Macdonald commissioned the "Report on Industrial Schools for Indians and Half-Breeds." This report led to native residential schools across Canada. First Nations and Inuit children aged seven to fifteen years old were taken from their families, sometimes by force, and sent to residential schools where they were made to abandon their culture. They were dressed in uniforms, their hair was cut, they were forbidden to speak their native language, and they were often subjected to physical and psychological abuse. The schools were run by the churches and funded by the federal government.

About 150,000 aboriginal children went to 130 residential schools across Canada.

The last federally funded residential school closed in 1996 in Saskatchewan. The horrors that many children endured at residential schools did not go away. It took decades for people to speak out, but with the support of the Assembly of First Nations and Inuit organizations, former residential school students took the federal government and the churches to court. Their cases led to the Indian Residential Schools Settlement Agreement, the largest class-action settlement in Canadian history. In 2008, Prime Minister Harper formally apologized to former native residential school students for the atrocities they suffered and the role the government played in setting up the school system. The agreement included the Truth and Reconciliation Commission, which has since worked to document this experience and toward reconciliation.

Through historical photographs, documents, and first-person narratives from First Nations, Inuit, and Metis people who survived residential schools, this book offers an account of the injustice of this period in Canadian history. It documents how this official racism was confronted and finally acknowledged.

This picture book informs readers about aboriginal culture and its loss through Indian Residential Schools. A positive chapter on "Survivors as Leaders" presents some aboriginal-Canadians who have become judges, educators, politicians, authors and artists. The book concludes with recommendations on many ways to educate Canadians about aboriginal history including especially the devastating impact of residential schools. The conclusions are less clear on the best ways to educate aboriginal children going forward; and how to strengthen aboriginal culture within the contemporary society and economy. The book concludes with a book list "For Further Reading" and an index.

This book is good for children as young as ten. Children in Canada can never be young enough to learn about Canada's dark happenings in history. Not everything is about fairies, princesses and superheroes.

A review of this title can be found under "Summary". The review also appeared in the Stratford Gazette in June 2016.

The federal government of Canada has estimated that at least 150,000 First Nation, Métis, and Inuit students passed through the aboriginal school system between 1878 to 1996. The death toll at the residential schools has been estimated to be from 3,000 to as high as 6,000. Most of these deaths occurred before 1940 when the mortality rate was about double the death rate for non-aboriginal children. As of December 2012 a total of $1.62 billion has been paid to 78,750 former students from the Indian Residential Schools Settlement Agreement. This book chronicles this tragedy in words and pictures.

At one time or another, 144 residential schools existed in Canada. Their purpose was not only to educate First Nations children, but also to force their assimilation into “white” culture. More than 150,000 children were removed from their families to attend these schools, destroying many families and lives in the process.
When students were finally able to return home, they often discovered that they didn’t fit in anymore. Many could no longer speak their language. They had forgotten their customs, their way of life and the foods on which they grew up. They had even been given English names.
Not until 1996 did the last residential school in Canada close its doors (“Gordon’s School”, Punnichy, Saskatchewan).
In 2008, the Canadian government apologized to survivors of residential schools. The Truth and Reconciliation Commission was launched to gather survivors’ stories in order to create an official record. In 2015, the Final Report of the Commission issued 94 calls to action.
Photos, images, links to video clips and other online resources are included in this educative, well-written book.
** Recommended for ages 10 years and up.

There are no age suitabilities for this title yet.

There are no quotes for this title yet.