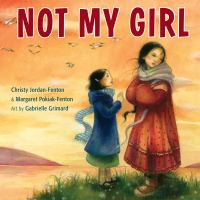 Margaret can't wait to see her family, but her homecoming is not what she expected.

Two years ago, Margaret left her Arctic home for the outsiders' school. Now she has returned and can barely contain her excitement as she rushes towards her waiting family--but her mother stands still as a stone. This strange, skinny child, with her hair cropped short, can't be her daughter. "Not my girl!" she says angrily.

Margaret's years at school have changed her. Now ten years old, she has forgotten her language and the skills to hunt and fish. She can't even stomach her mother's food. Her only comfort is in the books she learned to read at school.

Gradually, Margaret relearns the words and ways of her people. With time, she earns her father's trust enough to be given a dogsled of her own. As her family watches with pride, Margaret knows she has found her place once more.

Based on the true story of Margaret Pokiak-Fenton, and complemented by evocative illustrations, Not My Girl makes the original, award-winning memoir, A Stranger at Home, accessible to younger children. It is also a sequel to the picture book When I Was Eight. A poignant story of a determined young girl's struggle to belong, it will both move and inspire readers everywhere.

For many years, Inuit, First Nations and Metis children were taken from their families and communities to attend Canada’s residential schools. There they were denied the right to speak in their own language and many were given a new English or French name. The goal was to assimilate the children into modern, “mainstream” Canadian society. The children lived at school for years in substandard residential housing, entirely out of touch with their parents and removed from a normal family upbringing. Lonely and unhappy, many faced emotional and physical abuse.

Imagine the heartbreak when these children finally returned home to their families and communities only to find that they were outsiders again. Too often, the long years at school had erased their ability to speak their own language and their knowledge of the traditional skills learned during childhood. Sometimes they had even forgotten the names and faces of relatives in their extended families.

In When I Was Eight, authors Christy Jordan Fenton and Margaret Pokiak-Fenton offered a compelling account of one young Inuit girl’s experience at a residential school. In the sequel, Not My Girl, Olemaun returns home.

The nuns at the residential school have cut her hair and renamed her, “Margaret”. Olemaun now looks and sounds very different. Her mother doesn’t recognize her at first. “Not my girl!” she says, turning away. The family’s sled dogs no longer remember Olemaun’s scent and they growl at her as though she were a stranger.

Her first days at home are lonely and frustrating. She feels like an outsider as she struggles to remember her native language, her family’s ways of doing things and even her chores.

Olemaun perseveres, however, and after many weeks, she finally regains her sense of belonging. Her story ends happily.

Told in simple language, with compelling and expressive illustrations by artist Gabrielle Grimard, Olemaun’s story is honest, touching and powerful. Based on the true story of co-author Margaret Pokiak, who was taken from her Inuit home to attend a residential school at eight years of age, it gives readers an opportunity to learn about a dark period of Canadian history that still has repercussions today.

There are no summaries for this title yet.

There are no quotes for this title yet.