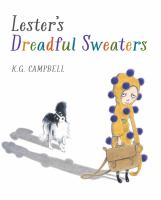 Everything went well enough at first when Cousin Clara unexpectedly came to stay with Lester's family. "Clara didn't make unsavory noises or rearrange Lester's Lost and Found collection. All she did was sit and knit." However, things quickly take a turn when Clara presents Lester with a sweater she knitted for him. Not a normal sweater. A misshapen, yellow with purple pom-poms sweater. A perfectly dreadful sweater! Lester is mortified to be seen in it. Luckily, it is destroyed in a mysterious accident later that day. But then Clara surprises him with another sweater, equally ghastly. When it, too, meets an unfortunate end, Clara knits another one, and then another to replace that one after its tragic demise. Is there nothing Lester can do to stop Cousin Clara's never-ending supply of hideous sweaters?Author and illustrator K. G. Campbell's unconventional picture book tale is brought to hilarious life by his drawings of uncommonly ugly sweaters. With its offbeat humor and terrific use of language, it would make a superb choice for a lively read-aloud. Though the fastidious Lester with his exceedingly good manners is a bit unusual, the dilemma he faces is a fairly common one, and this book could launch a classroom discussion about young children's own experiences with receiving unwanted gifts, and the trade-offs that are made within families between honesty and kindness. It would make an inventive resource for a lesson on hobbies or crafts, or for children's own craft projects as well.
Publisher: Toronto : Kids Can Press, 2012
ISBN: 9781554537709
Branch Call Number: PIC Cam

Oh my gosh, I think I liked this book more than my second grader, but it was fun and quirky and we laughed at the atrocious sweaters "Cousin Clara" makes. Great, new vocabulary words for my little boy who needs a challenge in reading. So, as a parent, I am a fan of this book for the new words that we don't see or use much in everyday language.

This book made me chuckle for long minutes! Lester is impeccably tidy with an accompanying tidy fashion sense. When Cousin Clara (whom no one is even sure is related) starts knitting hideous sweaters at a curiously fast pace, Lester has to figure out a plan for how to escape being forced to wear the abominations.

You know that cousin, that no one knows how they're related, but they keep showing up at family gatherings? Cousin Clara is THAT cousin. Except she doesn't get drunk or make inappropriate jokes or try to borrow money or set the couch on fire by accident. She KNITS. Horrible, horrible sweaters that Lester's parents insist he wear. Is he doomed?

One of our favorite children's picture books about families, even though it diverges from the shiny happy mode that many kids' books tend to favor.

I loved the creativity of this book about the many many dreadful sweaters made for Lester by his cousin Clara. The illustrations are gorgeous.
I know Lester appears to deal negatively with his humiliation, but it shows a very real story. Lester feels helpless and does the best he can under the circumstances. I think the end solution is very clever and works out best for all including Clara who really only wants to knit quirky sweaters.
I am going to disagree with the advertized age suitability however. This story is written to a more mature audience because of the deeper emotions displayed by Lester and the large vocabulary. I think ages 7-10 would be more appropriate.
Would I recommend this book? YES. Adorable and fun

Read aloud to a classroom of special needs 1st-3rd graders and their teachers. The adults loved it. The kids seemed ambivalent.

An interesting book with a twist. The sweaters are colourful and fun.

I give credit to the artist for imagining up some really dreadful sweaters!

We hold these truths to be self-evident that gift giving is an art. And when that art is perverted or twisted into something wrong and unholy, it can wreck havoc with a child's everyday life. Enter Lester's Dreadful Sweaters. You think you had it bad when Great-Aunt Hilda sent you twenty pairs of off-white tams? Buddy, you ain't seen nuthin' yet. This book goes extreme and ends up being one of the best picture books of the year.

When Cousin Clara’s cottage was consumed by a crocodile (fortunately, she wasn’t in it), she came to live with Lester and his parents.
All was well until Cousin Clara, who loved to knit, decided to make a new sweater for Lester to wear to school.
Shriveled yet saggy, with holes and purple pom-poms everywhere, the sweater was hideous to behold and hideous to wear. To be polite, Lester wore it to school, where he was teased all day long.
Later, the sweater was found in the laundry, mysteriously shrunken, stringy and unwearable.
“No problem!” declared Cousin Clara and immediately began to knit again.
The second cardigan was just as dreadful as the first. It was pink with a tail and upside-down pockets all over.
After school was finished that day, the pink sweater was “somehow” shredded to pieces by the lawn mower.
“No problem!” said Cousin Clara, and started to knit again.
And so the week continued, each morning with a frightful new sweater for Lester to wear to school, and an inexplicably ruined sweater each evening.
Not once did Cousin Clara grow tired of knitting yet another cardigan – but how Lester dreaded wearing them each day!
Was he doomed to look ridiculous for the rest of his life?
Listeners will laugh when they discover how a troupe of clowns is able to save the day for Lester in this droll, witty tale, generously sprinkled with alliteration, wordplay and clever illustrations.

“It was shriveled yet saggy. It has holes where it shouldn’t and none where it should. It was a less-than-pleasant yellow and smothered with purple pom-poms.”

“Cousin Clara’s cottage was consumed by a crocodile. Luckily, Cousin Clara wasn’t in it.”

When Lester is informed that Cousin Clara will be staying with his family he thinks little of it. And everything is fine at first (Lester’s a little anal retentive and fortunately she doesn’t muck with his stuff). But the boy has no idea what he’s in for when she informs him one day that, “I made you a sweater.” And whatta sweater. It may in fact be the worst sweater Lester has seen in his entire life. After wearing it to school Lester finds that the sweater has conveniently become shrunk in the wash. No matter. Cousin Clara is, as she says, a “curiously speedy knitter”. And from her knitting needles erupt sweater after sweater, each beating the last out in terms of horrific awfulness. It isn’t until Lester uses his head after a birthday party and enlists the help of some good-natured clowns that he solves his sweater problem and even manages to break out of his shell a little.