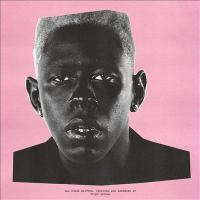 My opinion on IGOR, I believe that Tyler showcases a more polished iteration of the hazy pop he’s been perfecting for years. Even though some might be disappointed that he’s becoming more of a singer than a rapper; I'm not, this project should encourage more artists to disavow labels and relish in taking risks.

@Apanchal0088 of the HPL Teen Review Board

IGOR is an album that was released in 2019 with 12 songs coming in at a total of 39 minutes long. IGOR won the Grammy Award for Best Rap Album, even though not having many rap songs in the album. The album has many genres like Hip Hop, Rhythm and blues, R&B, Funk and Electronic, making it a good album for songs that most people can listen to within the genres. My favorite song from IGOR is EARFQUAKE, it was actually the first ever song I heard from Tyler, The Creator and I love that it is in this album. The theme IGOR was following is love, and themes related to love like heart break, loss and jealousy. I’m giving this album a 5/5 for having many genres for people to listen to, and also winning the best rap album award. This has been Quisque with a SICK album review.-@Quisque of the Hamilton Public Library's Teen Review Board

(Album contains swear words!) Igor by Tyler, The Creator is a four out of five album for me, and if we went into specifics, it would be a light four for me! This is Tyler’s next album that came out of Flower Boy. Personally, this album had to grow on me. After a few relistens I liked it overtime. This album has a lot of really good songs, personal favourites being BOY IS A GUN*, and GONE, GONE/THANK YOU. The music always feels at some parts you’re lost in a trance and I really like the vibe from his music. My reason why I prefer Flower Boy over Igor is because I think Flower Boy is more “in your feelings” mood compared to Igor, which I like. Igor is still good though, the songs are really well made, especially with the instrumentals, I think that’s where Igor shines bright. Overall, I’m excited to see what Tyler is going to release next time. (Hopefully this year!) This is Koffee, and you’ve been served a fresh review!
@Koffee of the Hamilton Public Library's Teen Review Board

Igor is Tyler, The Creator’s fifth album which was released on May 17th, 2019. This album was completely written and produced by himself, which is very impressive. He also featured other famous artists like Kanye West, Solange, Playboi Carti and Lil Uzi Vert. This album received a great positive reaction. Tyler, The Creator received a Grammy win for Best Rap/Hip Hop album which was very well deserved. The best tracks on this album are I Think, Running Out Of Time, A Boy is a Gun, Puppet and Are We Still Friends. It is very difficult to pick one best song since the album is so good. The best aspect of the album is production. All of these songs transition very beautifully. Another amazing aspect of this album is the delivery of the lyrics. The lyrics not only are emotional but we can also hear it in his voice. I recommended this album to anyone that loves music that just sounds beautiful and clean. 5/5 stars
@grxcerose of the Hamilton Public Library's Teen Review Board

My opinion on IGOR, I believe that Tyler showcases a more polished iteration of the hazy pop he’s been perfecting for years. Even though some might be disappointed that he’s becoming more of a singer than a rapper; I'm not, this project should encourage more artists to disavow labels and relish in taking risks. My favorite song of the album is “EARFQUAKE”, it showcases a wide range of vocals from Tyler and also features Playboi Carti. Carti has not released music since 2018, so when fans like me heard a newer version of him we instantly considered this song a favorite. Tyler’s part on this song is melodically sung and is the “catchy” part of the song. I would not recommend this album to someone who is new to rap because of at the abstract beats, it simply is too much to handle for someone who doesn’t listen to rap in the first place. however, if someone has been listening to rap for a while and wants to listen to a more complex album, I would definitely recommend IGOR. Final rating: 3.5/5
@Barcelonafan1 of the Hamilton Public Library's Teen Review Board